On July 20, 2021, Zhengzhou City, Henan Province and other areas encountered a thousand years of extreme and rare heavy rainstorm disaster. Although the flood disaster is merciless, hitchhikers show great love. After the heavy rain, the signal interruption, the World Downwinders Day Organizing Committee Office, immediately set up a command center, and start the radio handset, contact with rescue experience car enthusiasts. Quickly set up to the World Downwinders Day Vice Chairman Jiang Junbao as the leader of the Zhengzhou City Downwinders rescue team. During this time, a lot of moving stories happened so that the majority of our downwinders learn.

On the morning of July 21, someone in the circle of friends released information, there are two girls trapped in the southeast corner of Sanquan Road Zhongzhou Avenue Bridge petrochemical gas station, the command center quickly forwarded the information to the North District of Jiang Junbao, after receiving information, Jiang Junbao quickly led downwind riders Sun Zhining and his son Jiang Hao Yu, bring the canoe, together with the car to rescue people, who knew that there is nearly a kilometer from the gas station, the car can not drive over. Immediately carry the submersible boat wading over, when the water has reached the waist, and the flow is very rapid. May be mixed with sewer water, emitting a dirty stinky nasty smell. Finally, two girls were rescued. A girl said with tears of joy: we know the public welfare hitchhiker, know the World Hitchhiking Day, did not expect to see here today, thank you!

In the afternoon of July 21, the command center received information that a caring company Xinjiang Tianshan Yunmu Dairy Co., Ltd. had donated some milk to be sent to the people on both sides of the Jalu River, which was the most severely affected area, as well as to the public security police who were fighting on the Jalu River. After contacting the Zhongmou County Public Security Bureau, we learned that all the public security police officers and other flood control personnel from Guandu Town Police Station were on duty on the Jalu River overnight at the moment.

At that time, the warehouse of the caring enterprise was in the west of Xingyang, and the delivery of the Jialu River bank in Guandu Town was in the east, so time was tight. In order to send the donated milk to the flood warriors earlier, so that everyone could drink the caring milk as soon as possible. Jiang Junbao took off the clothes full of sewage, put on a clean clothes, and car friends Cheng Haifeng, Cheng Xiaofeng, Xu Jing together, immediately with two downwind car, straight to Xingyang, to the place to see, the warehouse on the fifth floor, but also water and electricity outages, so, without saying a word, we directly one by one down to move, until 6:00 p.m. to load the car, the boss of the business moved to say something to eat before leaving, Jiang Junbao said. “No, it’s important to catch up.” And he set off immediately.

When the car left Xingyang, it was raining heavily, and Jiang Junbao urged everyone to drive carefully. Later, Cheng Haifeng, a fellow hitchhiker, said, “This is the biggest rain I’ve ever seen in my life, so I’m really scared.

Finally, with the continuous efforts of everyone, the milk was successfully delivered to the bank of Jalu River.

Rushing to help Baijia Village in the rainy night

After unloading a batch of supplies in Jialu River, Jiang Junbao received the latest information from the command center of the organizing committee, and immediately rushed to Baijia Village, Diao’s hometown, which is a more seriously affected village because of its proximity to Jialu River. When they arrived at the place, they saw that the water had flooded all the roads in the village out of sight, and the party members and cadres and people in the village were on duty at the front line, and the enthusiasts delivered all the 100 pieces of milk before they ate the flood fighting potluck at the village head, and it was already late at night. 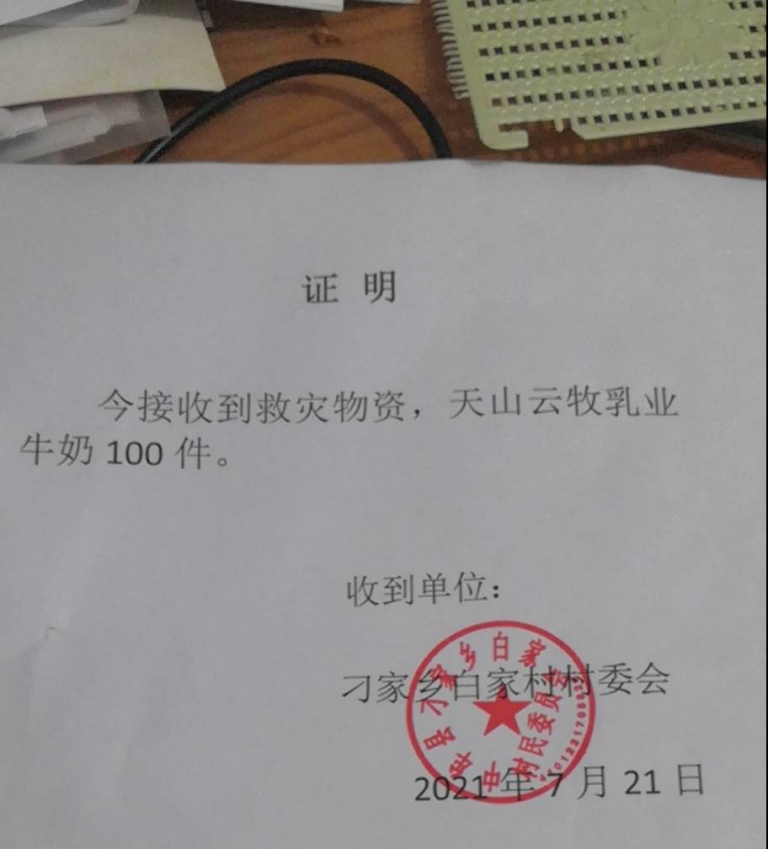